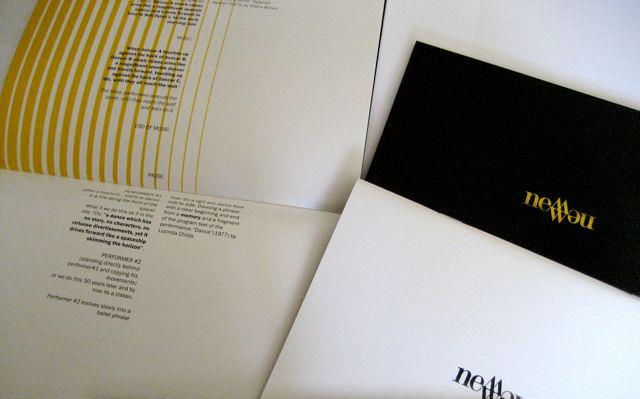 The following script/score was produced between 2011 and 2013 in the process of creation of the performance NEW. A process that started as a conversation among the three of us -Irina Müller, Felix Marchand and Ayara Hernández Holz- about what we remember from dance and theatre performances that we have seen in the last years, and the traces that those performances have left in our bodies.

The text is a collection of fragments of memories from performances that have printed a journey in our life as spectators and choreographers. An specific archive that was created from shows we saw meanly in Berlin, the city we have been living in the last decade.

NEW is a journey that blends a collective history of the spectator’s gaze with a personal archive of body memories and the struggle of the creation process. In this work we deal with the act of remembering and the lack of being accurate in what we remember, a process of constant re invention and imagination.

We have collected several memories of fragments of performances and rewritten these memories into tasks. None of the tasks that you will find here are directly connected to the original work, but rather to what we imagine the author or the performers were dealing with, and to how we specifically remember those moments. We allow ourselves to embody these fragments and to translate them into new movements, texts or images.

NEW could be rewritten every time it is performed and every time this text is read, because our memories are constantly changing, reforming, being forgotten and being remembered anew.